What if ... everyone had a Carbon Score?

I thought I might challenge your imaginations and ask a few “what if” questions here, on Financial Wellness related ideas, to see what we imagine our future could be like.

What if we managed to (reasonably accurately) calculate everyone’s household Carbon footprint, and used this to create a Carbon Score (like a Credit Score for your environmental impact)?

What could it mean?

What would it be like to live in a world where the taxes you pay, and maybe even interest you earn/pay are affected by your environmental impact, with higher borrowing costs for those who already consume a great deal? Or maybe better savings rates for those who have minimised their emissions, so that they benefit from their efforts?

How would you rate, and do you think this could have a positive effect on taking action on climate change? Or would it be regressive and not change behaviour in the places it is needed most?

The Social Credit System (Chinese: 社会信用体系; pinyin: shèhuì xìnyòng tǐxì) is a national credit rating and blacklist being developed by the government of the People's Republic of China. The social credit initiative calls for the establishment of a record system so that businesses, individuals and government institutions can be tracked and evaluated for trustworthiness. There are multiple, different forms of the social credit system being experimented with, while the national reg The program initia...

But let’s break this down: visibility is good. Understanding your impact / data (be it on carbon or other stuff) is important if you’re gonna do something about it.

What would it be like to live in a world where the taxes you pay, and maybe even interest you earn/pay are affected by your environmental impact, with higher borrowing costs for those who already consume a great deal?

But then we get to this. This feels like an overstep. I’m down with governments using levers to change behaviours - but I expect them to be fairly direct. So taxing travel or highly carbon inefficient goods feels like fair game. But to give me a “score” that’s held on a central database and which means I’m treated differently for the same product, service or access to government services feels like an overstep.

Ultimately, though, I suppose it depends on your political persuasion, and what you consider the role of government to be.

Carbon tax is a possibility, but I think “personalized offers” have gone too far. However, domestic carbon tax is not a solution. Because carbon tax will suffer from the very same issue other taxes are facing - tax avoidance. A rich person or a multinational company can always find ways to “transfer” their carbon consumption/emission to foreign countries with lower or nil rate carbon tax. Unless a global minimal tax rate is agreed and set by all countries in the world, this kind of tax avoidance is not going to disappear.

I take your point - but just to be clear, this is for fun and to practice our imagination, I’m not seriously proposing it

As you say, some people will always find ways to avoid it, and in other cases, it will be a minor inconvenience to those who already have plenty of money and ought to be the target for what is really an “over-consumption” cost.

The thing is, a Carbon Tax already exists, and I liked the idea of the better rates, not just because it would (in theory) cost more for those who consumed a lot, but because it rewarded those who took action and consumed less. Sometimes you need a carrot as well as a stick to get behaviour to change.

… but the link @Peter shared is rather concerning

In this imaginary future, the carbon score would be used for good and managed by a trusted third party, honest!

this is for fun and to practice our imagination, I’m not seriously proposing it

Well… you never know! Carbon score or something similar may actually become a thing in the not too distant future.

I liked the idea of the better rates, not just because it would (in theory) cost more for those who consumed a lot, but because it rewarded those who took action and consumed less.

They are the same. If you don’t think they are the same, that’s because you aren’t thinking of money as a fungible asset. Money is fungible, that means a £20 bank note is the same as another £20 in a bank account, it doesn’t matter where did it come from or what form it is in - you earned it (got a better rate) or you saved it (did need to pay the higher rate tax), the result is the same.

However, psychology is an interesting thing. Even the money are the same, people will feel differently about them. Take universal basic income (UBI) for example, someone could get an UBI and pay tax on the whole of their income, or not getting UBI but gets a 0% personal allowance. The end result could be identical - exactly the same amount of money going into their back account each month, but UBI will result in a happier person, because they think that they’ve got “free money”.

So, yes, I get your point that there should be a carrot too. Perhaps in the form of a progressive tax system that starts at a negative sum? Much like the UBI idea, a person will get paid by the government if they don’t emit any carbon, but the more emission they produce, the less they get paid. If they emit large enough amount of carbon, eventually they will have to pay the tax to the government.

I think there is a great deal of interest amongst some people in knowing their personal carbon footprint. Some apps are using Open Banking to analyse expenditure but the calculations are based on generalisations so really provide a ballpark figure rather than a ‘carbon audit’.
Knowing your carbon footprint in isolation doesn’t help you to address it and, of course, there will always be people who simply ignore it. Manufacturers and service providers are going to have to display a carbon rating for their output, similar to the energy rating labels on white goods.

I think taxation is the best option to encourage people to reduce their carbon footprint. But, it needs to be extended to all aspects of the economy and needs international cooperation so that the wealthy, large corporations, etc cannot take advantage of low tax jurisdictions. The existing carbon tax would need to be extended to all energy generation from carbon or non-renewable fuels, all products that contain oil or mined carbon components or use them in the manufacture/supply chain, remove all tax breaks on investments in drilling/mining carbon fuels, disallow carbon based investments from pensions, ISA’s, tax free bonds, etc. This would mean, for example, a fiat tax on Bitcoin mined using non-renewal energy. A more robust and comprehensive tax regime would reinforce the concept of “polluter pays”, incentivise manufacturers/service providers to decarbonise and put in place pricing mechanisms/nudges to encourage consumers to make low carbon purchase decisions.

Of course, this can’t be done overnight and it would be unfair to penalise consumers with higher taxes on goods/services with no decarbonised alternative.

The topic kind of reminds me of this "Black Mirror" Nosedive (TV Episode 2016) - IMDb episode of Black Mirror.

I’d be in support of something like this it if it had real meaning but I am not sure what that real meaning would be.

It also seems like something that easily become the next debt trap or even at an extreme end of the scale like the hunger games lottery. If people in “carbon debt” can’t get as good of deals as those no in debt then things like electric vehicles could be out of reach and before you know it we have class/caste based system that disadvantages and stigmatises people in carbon debt

This discussion reminds me of… 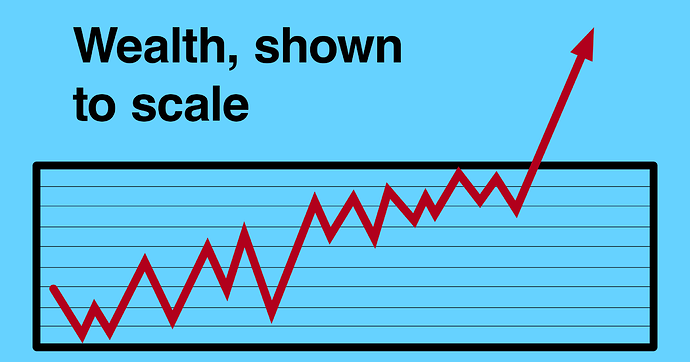 Wealth inequality in the United States is out of control. Here we visualize the issue in a unique way.

The biggest producers are the usual suspects - the superwealthy and their corporations. Getting lots of individuals to offset is just pointless. By the time cars are electric and gas boilers have been replaced by electric too, there’s very little the average person can do, if we’re still happy to let Bill Gates bomb around in his private jets