For some reason the virtual card disappeared when I activated my card. Haven’t used the feature before but was intending on doing that. 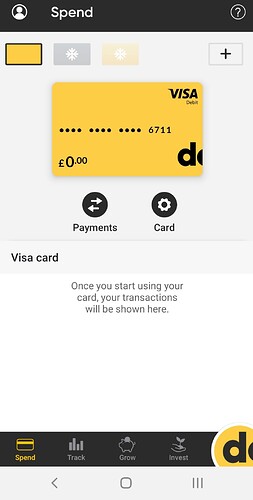 I think that was intended. The card details are the same - the virtual one was only in case you didn’t want a physical one, I think.

@robert should be able to confirm.

the virtual card disappeared when I activated my card

that is the correct behaviour

as @Peter said, the idea is to offer everyone a virtual card in the app, but if you decide you need a physical one, to replace this with the physical one

In future we may have standalone virtual ones (using the same tech), but for this set of cards (just as we are relaunching and switching) that would be confusing, so these are either virtual or physical - and as you activate the physical one the virtual will be removed.

We have sent some physical cards straight away to customers who have used the card actively over recent months because we appreciate that while we have not yet launched the ability to add these cards to digital wallets (like Google Pay), those more active customers might find themselves restricted in shopping and ATM use.

However, we should have good news about Google Pay and Apple Pay very soon, and therefore more customers will not need to request the plastic cards.

That’s ok I guess. I was thinking in the lines of having disposable virtual cards a la Revolut but bottom line is no biggie.

I don’t intend to take a physical card for dozens at the moment so I admit that for me it is academic. However, I think it is a shame that the virtual card disappears when the physical one arrives. I have a Starling account and can see all the card details, including the cvv, using a PIN or fingerprint. While I carry the card for ATM use I have still found it useful just having it on my phone for online purchases when I don’t have my wallet on me.

I have a Starling account and can see all the card details, including the cvc, using a PIN or fingerprint.

This is actually how it works now with Dozens. After the physical card is activated, it combines with the virtual card. The details of both cards are the same anyway, and can still be viewed in app after authenticating in the card menu.

I must be misreading or misunderstanding what was said. I thought oupabota said the virtual card disappeared when the real one was activated.

Before the physical card is activated, you have three cards in your app (at least currently). These are the old MasterCard, the new virtual card, and a representation of the new physical card.

However, the virtual card details are still available in the card menu screen. And can be viewed in the same way as when you had a virtual card. This is by clicking on the view details button on the physical card.

Does that make anymore sense?

After the physical card is activated, it combines with the virtual card. The details of both cards are the same anyway, and can still be viewed in app after authenticating in the card menu.

actually this is almost right but not completely

the two cards are merged, so there is only one balance and one transaction list. The card number (or PAN) is the same, so you don’t see a difference. However, the physical card has a difference CVV (for security) and might have a difference expiry date depending on when the two were created.

So in practice, the virtual card does disappear.

We will have further news on new virtual cards in future when we upgrade the app with lots of new features in the new year, things that will now be possible thanks to the migration to the upgraded Pi1 platform. However, at the moment, it is an either/or for physical and virtual cards.

The next steps will be Direct Debits as well as the ability to use mobile wallets, and then we will start to roll out more features!

Thanks for the correction

I think I see it now. I only had the virtual card…not the representation because I’m not getting a real card. That’s why I couldn’t visualise what was happening.

why I couldn’t visualise what was happening

Dozens is taking a sort of “virtual first” approach, presumably because they think more and more people are using the “x” Pays, so will never need a physical card (particularly if dozens starts connecting to the Pays quickly). So, as a non-subscribing customer, you’ll get one free card, which is virtual initially, then becomes physical (with new expiry date and CVV) if and when you order a physical card.

I suspect dozens may make multiple and/or physical+virtual cards a Black or paid-for feature. Though I personally think one free virtual on the standard account would be nice.