It’s nice to be special!

Le sigh. Still waiting on that £2. Your “payments team” is not instilling me with confidence, @robert! I was told to expect an email from them, and haven’t had a sniff. Not even one saying “we’re looking into it, bear with”.

I don’t want to be special any more.

I don’t want to be special any more.

Oh, you will always be special.

I’ll chase the team, but I am sure it is literally about to be done.

Any news on the bonds and the “Invest” section of the app? Seems to have languished and not done much since the crowdfunding was announced!

Appreciate it has probably been very busy at Dozens HQ!

Hi, I understand smaller amounts will be prioritised on the bond issuance. But how small is ‘small’? If I bid £1,000 for example, is that likely to be accepted? £5,000? Not really bothered for only £100 as that will only get a £5 return over the year.

I can’t do better than the post that we just shared in our social channels, so I am sharing the content below for your information as well. This was also a test-run, so was only open for a few days, but it helped us make sure the bidding, allocation and communication processes were working. We gathered some very useful feedback which has been taken on board to make the process easier and clearer, so thanks to all for your comments. [5%25%20stat%20v5] The bidding for our first ever £100k se…

Essentially, they add up the bids, starting with the lowest bid, until the bond is subscribed, so you’re less and less likely to have a successful bid the higher your bid.

Also, once up and running properly, it should be more regular - monthly, I believe - so you could save £100 one month, £1000 another month etc.

Hi Ian - we cannot know in advance or advise on that.

As we explain in the post @gaoler helpfully shared, we sort ALL bids into ascending order from £100 up. That way we allocate the available issuance to as many different customers as possible. We do not set a cut off amount, this is simply a result of what bids are made by customers in that month.

For example, let’s say we issue £1m of bonds in an issuance.

If 10,000 customers all bid £100 then that would share the £1m equally. In practice not everyone will take part, and some will bid higher amounts.

So if 1000 customers bid £100, then there would still be £900k available to share between everyone else. In that case we start allocating the £200 bids, and so on. However, if they all bid £1000 then this would use the whole allocation.

While buying a single bond at £100 generates £5 in interest over 12 months, the idea is to be able to do this regularly, not just when you have large lump sums. If a customer were to buy £100 each month, over 12 months that would result in a lump sum of £1200, plus interest on each of those bonds being paid every month.

Thanks, encouraging to see the average successful bid was over £1,000 in the first pilot. I didn’t realize we’d be able to do monthly bids, I had the impression the bonds issuance would be less frequent than that.

There has been a bit of a gap while we worked on some app upgrades and dealt with some process changes after our crowdfunding campaign, but our intention is to make this a regular offering so customers have options on a regular basis

Hi @robert - do we have an idea as to when the bonds will be re-started now that the crowdfunding has completed?

Considering the initial bonds were from 1/3/19, those that joined and missed the dates for that issuance have now waited more than 3 months with promises that they will be coming but no real information on when that will be happening. There does appear to be a lack of progress or drive to actually get the bonds available for people.
It does feel that the bonds were used as a marketing ploy to get their 10000+ customers but they were not in a position where they were ready to take on new customers and deliver on the marketing messages they used.
Will we actually see these bonds? and will we see them soon? (It would be helpful to actually have some dates rather than we are working on it or that they are coming)

Well, they did credit our accounts with money for missed interest.

Oh, and if you’re a shareholder: 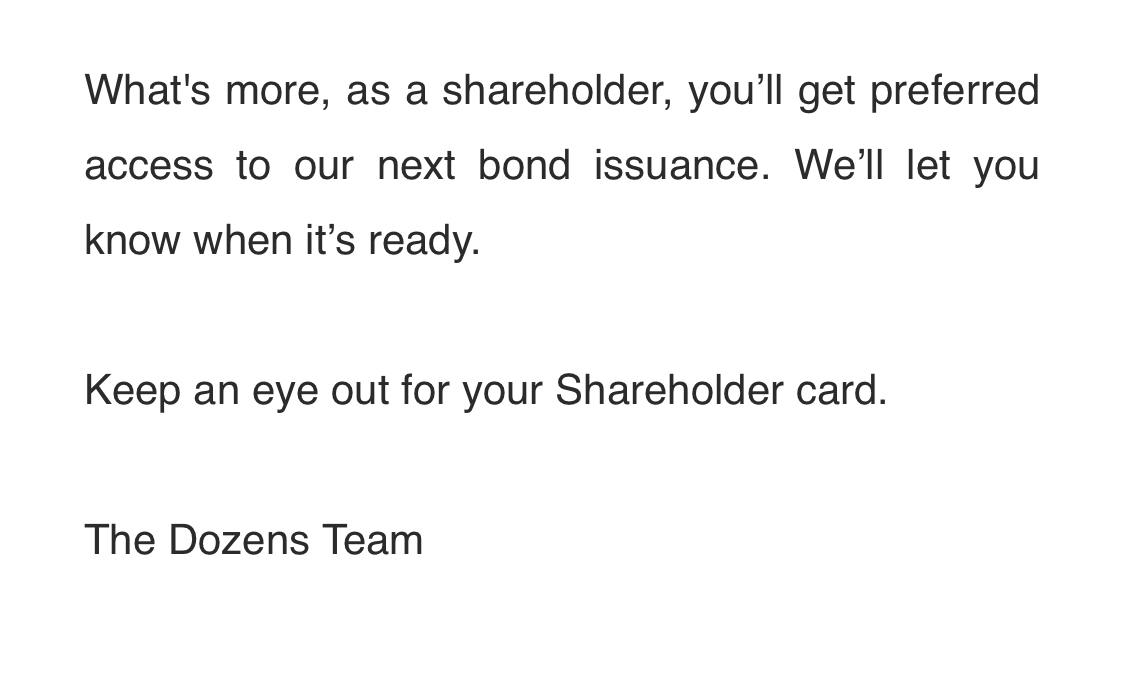 For me the frustrating thing with the bond delays is not so much lost interest, its when they do become available I will have a larger lump sum to invest than if I had been able to spread bond purchases over several months. Buying a larger amount in one go gives less flexibility if/when I need to withdraw.

Exactly, everyone will be competing with higher amounts and potentially lose out.

The credit they applied didn’t cover up to this point and only assumed small values, whereas some people will have invested higher amounts into the bonds

It was a canny marketing ploy, pure and simple. The “March” issuance of the bond has still not gone live, even though we are now in July.

If any mainstream bank had deceived people so badly there would be an uproar. But because it’s dozens, well, we just have to stay silent and patient.

This financial organisation will have made a very pretty packet on the money that is saved in dozens accounts ready for investment into the much-hyped bonds that is earning customers 0% month-in month-out.

I wonder if the March salary for dozens staff still has not been paid as of 1 July? Or does the long-term incompetency only apply in terms of how dozens customers are treated?

Ordinarily I’m quite quick to jump to dozens’ defence. However, I think you’re right. Dozens, quite frankly, are not delivering on what was promised, and I think we’re past the point of it being acceptable because they’re new on the market.

I’m not sure that this is correct though. My recollection is that this money is held by Lloyds group and dozens has no access to it, and gets nothing from it being there. I could be mistaken on that.

It’s frustrating that a feature hasn’t been delivered, but this might be taking things a bit far. There has been no need to transfer money in to the savings account far in advance of an issuance, and there’s nothing stopping people that did transfer already from taking the money out again.
By all means, take your money out and transfer it to another instant-access savings account that does give you interest, and put it back in to Dozens if and when they do the next issuance.

The “March” issuance of the bond has still not gone live, even though we are now in July

You made similar points a while back and I can understand your frustration.

Not surprised you’re leaving dozens. Unfortunately there’s too many people who are drinking the kool-aid of this ‘challenger’ financial institution, as their dogmatic perspective is all legacy banks = evil, all challenger institutions = saints. This is mostly based on factors such as the former wearing suits in the office while the latter don Bob Marley t-shirts. Therefore they will give dozens blind support no matter what. For what it’s worth, I think it’s extremely unprofessional for dozens …

I think there are very different expectations about how fast dozens should be moving.

AC was suggesting months back on 16 April, and it seems that is more or less right.

We are committed to getting all of this right in the next few months and hopefully present you with a genuine alternative to your high street current account, plus access to simple investment products

In reality, their entire offering is a work in progress, as is clear from statements here at least.

We do understand, and we are working hard to resolve this and many other issues with products and services.

The bond product exists and will be available shortly, however, as we have explained previously, there have been both technical issues with getting the process made as smooth and accurate as possible, and then some further changes required as a result of the crowdfunding process.

We are hoping that all of this will be resolved very shortly and we can make this option available.

You can still do this, if that is what you want. In fact the fixed-interest bond is really designed to help with regular savings. Once available again, there will be a new issuance on a regular basis so that you can spread your money over different months, or if you are still saving, be able to join when it suits you.

However, Dozens is not just about the fixed-interest bond product, and we are also working hard to bring you the best possible view of your spending and budgeting, as well as functions such as managing your cards, foreign exchange and, of course, investment choices. There will be some new details about some of these aspects with the latest release coming shortly.