What was the thinking behind the name of the app/bank?..Now if I were to see the app icon on a phone it wouldn’t automatically scream financial product. Saying that I suppose its the same with Monzo and other fintech companies. I just find it interesting how all the new fintech companies seem to have non-corporate names and not even have the word bank in their names (as if its a bad word) - apart from starling I suppose

Were there other contenders during the brainstorming session when you decided on the name?

Hey @kthomas, this is a good question! I don’t want to spoil the fun by answering it outright, but some community members were actually involved in the naming process! @Tor @AnnieD do you guys remember your initial reaction to the name dozens?
On why we didn’t call it a bank: it’s because we are not a bank yet! But we are working on becoming one!

(A lengthy blog post on our naming process is in production

Yeah, we were rather puzzled, loads of us thought about eggs, and we all thought it would be more of a development name and not stick. Then you explained how you’d arrived at it (and the main point was that there are so many names that are copyrighted just to keep them in reserve, and therefore it’s hard to stumble onto a new one), and what was meant by it.
Frankly, after we saw the product offering take form, we sort of shrugged the name off, and thought about all the great products that started with weird names, and are now a household one (google anyone?)

Yes a lot of us weren’t keen initially, but when we were sold that it is open 2 lots of people and then saw the idea develop, it really began 2 grow on me that you could be part of such a large community

I was asked this elsewhere and these are my own interpretations - bear in mind that I joined a business that was ALREADY called dozens at that point and I thought it was clever and interesting:

dozens is a term that we (in the UK) tend to use instead of ‘many’, but still mean something of a manageable and human scale - like "there were dozens of people at the event" or “I could give you dozens of reasons for using that name”, and even a cheeky reference to pre-decimal pennies, … but also because finding unique and memorable names in the field of banking is never an easy task - it took dozens of tries

Interesting that the community members were involved with the naming process! I agree that if the product is good enough the name won’t be a hindrance…although I’m not sure if I would have used a search engine called BackRub with this image as its home page (Google’s original name!) 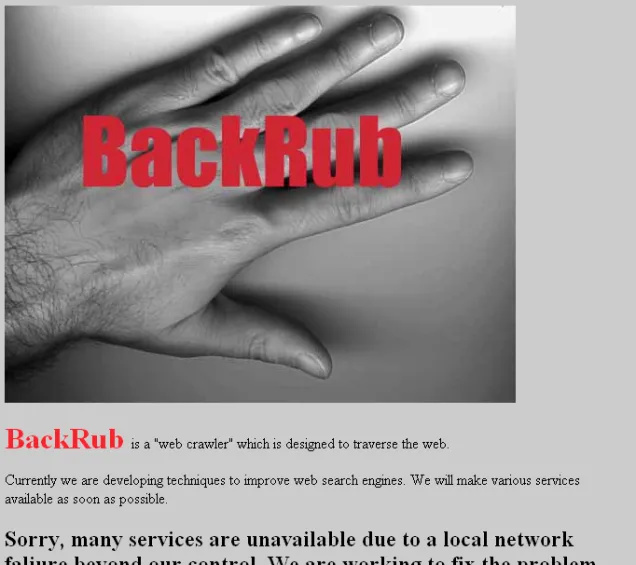 I keep forgetting that little bit of tech trivia, that was indeed slightly dodgy