Our Savers Awards are an important feature of the

app as they bring to life the priorities that we believe in and want to support via our services. They benefit customers who are using the card regularly so that they can track their spending, and finding ways to put some money aside, and where this pot is put to work to provide them with a wealthier future. 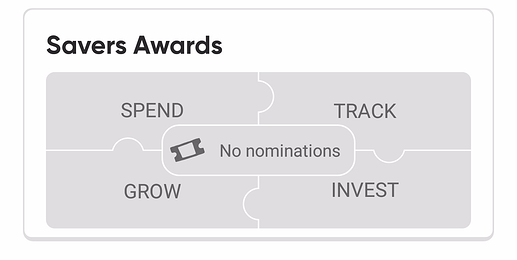 We’ve had these algorithms running in the background since we launched, tracking the activity of all users so that we could see if the nominations were being added correctly, and the values we had given for each were fair. In some cases we’ve had to tweak these and make sure nothing was being missed.

We have just tested the process of random selection of winners and we are in the process of sending out messages to the lucky winners. As you may have seen, there are 10 prizes of £100 each, available to customers each month, with a draw made around the 7th of each month, when we then contact the winners and transfer the funds.

This is still the first test draw. We have now reset all counters while we make the final changes in time for next month’s awards. The updated presentation should arrive in your apps by the end of the month when
we will also share the full details of the updated rules and processes.

No luck this time then!

Any winners on the forum?

Emails are still on their way, so there’s still a chance

Winners will have to identify themselves if they’re willing, so who knows

I just realised there is potentially a small loop hole.

One week I set my budgeting very very tight, and obviously missed all targets hence no award nominations tickets.

Another week I artificially loosen up the targets, easily met, and voila! a few more lottery tickets.

You could - there is nothing we can do to stop it really, so it is up to you. It does increase your nominations but still does not get you any guarantee of any win

Hitting your weekly target will get you 10 nominations, but it is actually about the consistency (we’ll explain more soon) that will get you the most benefits

Were any winners also members of this community?

The emails have now been sent and payments made, so if any winner was willing to let us know if it was them, we’d love to hear your feedback

You say the team has reset all the counters. Does that mean they have been turned off while you do additional work? I’ve noticed since the reset I’ve added funds and got 0 nominations at all

Yes, we first reset the counters for everyone and these are not displaying in the app at the moment. However, we are tracking the transactions and ‘nominations’ in the background and will apply these once the update is out, so the next draw will be around the 7th of June as planned

Congratulations to those who have won and can see this!

so the next draw will be around the 7th of June

Hi Robert, did I miss the announcement for the next draw?

The draws are done every month from now on. There is now no specific announcement other than the emails sent to the 10 lucky winners. If they choose to identify themselves that would be great.

Once we have a few months of data to work with, I will try to announce some of the statistics that come out of this, such as the numbers of people in each draw, or average numbers of nominations, and so on.

The counter in the app may still be showing null values but we are counting all of these on the system and the interface will be updated in an upcoming release so you can keep a better eye on your totals and see how your behaviour is influencing your number of nominations and therefore your chances to win.

Is there something else you would like to hear on a monthly basis?

Quick update to let you know that the latest Savers Awards for June have just been paid, so check your apps - it could be you ™

I’m still hoping we get to hear from one winner who happens to be in the community and is willing to let us know … it would be great to hear about how much you used the app in order to get the winning ticket (even a single nomination is enough) but also what you might plan to do with the winnings.

The Savers Awards have just been announced for this month! Are you one of the lucky 10 to win £100? You can check in your

And share with us here, dying to know who won this time!

It seems to have all gone quiet on this front… Will we be seeing some updates soon?

There have been some delays bringing the information into the app, while our focus has been on developing the invest features and relaunching our fixed interest bonds. However we do expect this will be added back shortly.

However, the savers awards are still being awarded based on the data tracked on the server, so even though these are not visible in - app, they are still very much happening.

We’ve awarded 10 awards of £100 each month since we announced these in May, and we’re particularly excited about announcing the December awards which will be 10 x £1000 awards.

If you have any questions, feel free to post them here

Just won this month. Slight disbelief as I haven’t used the card for ages and just have a couple of savings rules running. There’s no way it’s effectively rewarding behaviour, as there’s really very little to measure! 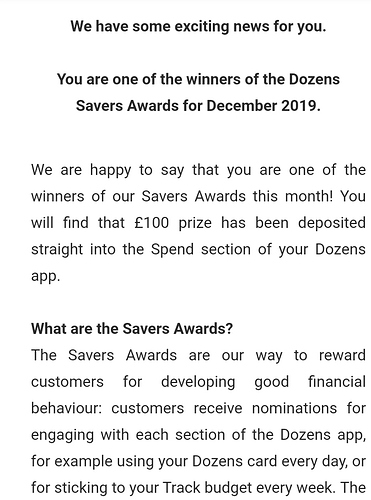 Aha! We had to have a community winner eventually!!

I take your point about behaviour, but in truth it is a random draw, so even is you have a single transaction you CAN win. However, with more activity, particularly having a bond or investment, your chances increase dramatically.

You must be very lucky

Ah, it was probably the bond that bumped up my score then.

Still no nominations showing in the app, so no idea what my score is or was…

In true saver fashion, I shall put it straight into the next bond!

Absolutely! As you said, this is about encouraging and rewarding positive financial behaviour, so bonds give you substantial numbers of nominations