Have you calculated your carbon footprint?

I was browsing some discussion topics relating to what factors affect our consumption decisions, and came across this Carbon Footprint (or Environmental Impact) calculator from the WWF 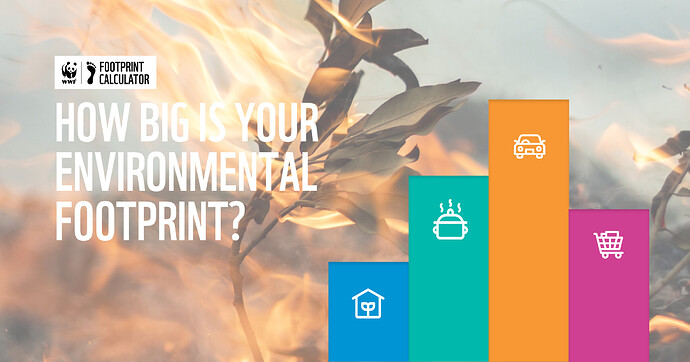 The planet is in crisis - from climate change to the pollution in our oceans and devastation of our forests. It's up to all of us to fix it. Take your first step with our environmental footprint calculator.

Have you ever calculated your personal footprint? Has this affected decisions you take about spending money (on travel, clothes, etc.)?

If you take this survey, would you be willing to share your results with the community? (I’ll post mine below shortly, to be transparent)

I’d be extremely interested to chat about a link between those who put more money into savings, with those who have already made some adjustments in life to reduce their impact.

So here were my results. 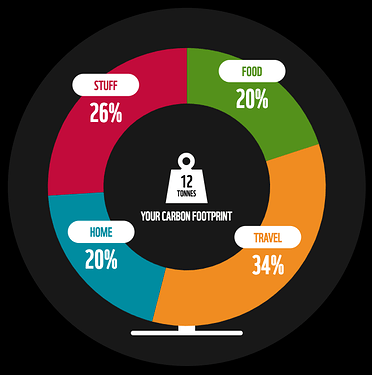 Overall I feel like I’m doing OK (though that is not really true since I’m above the target, but I am below average). I have made a number of adjustments to family life (including solar panels and lots of recycling at home) so I know I’m a little out of the ordinary. I’m also very conscious of flying, and we rarely use our car and almost always use public transport - but we live in London, so that’s easier. That’s why I wondered how our totals might compare.

I could do better, but 5 flights so far this year, was always going to make it difficult. I’m still happy with my results. 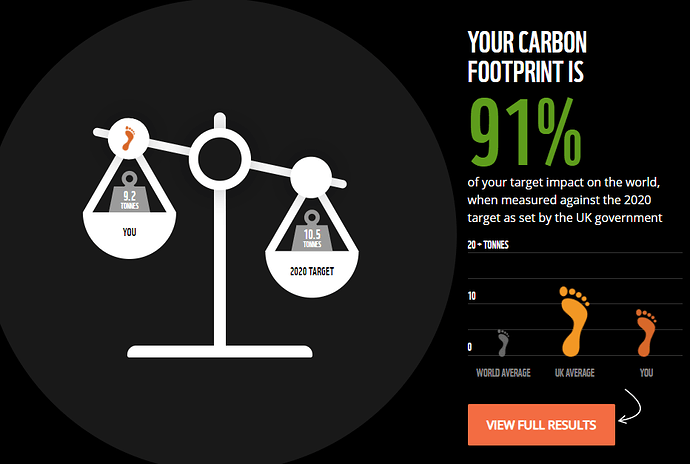 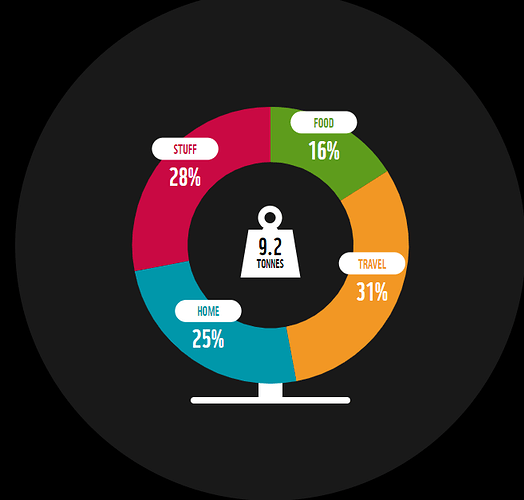 That’s really interesting. It would be fascinating to get the data behind this to see the factors affecting your compared to mine, but congratulations on achieving this footprint! I doff my virtual cap to you!

Do you consciously consider your carbon footprint (or environmental impact) in your consumption decisions?

My downfall is flights, I actually nearly always choose flights with a lower carbon footprint than normal but I fly a lot. Nowadays with Skyscanner that is simple, it shows you clearly which flights have a lower carbon footprint, and you don’t have to pay extra for it, sometimes it will just mean travelling from a different airport, but as Luton, Stanstead and Gatwick all take me about an hour, I don’t care which airport I fly from. I use public transport.

Foodwise, Tescos for example do locally sourced, which means you know its not come hundreds of miles, I’m lucky enough to have a local butcher and greengrocers which are reasonably priced and the food is always fresh.

I recycle nearly everything I can, anything that needs replacing in the home, I sell what I don’t want, so its not being binned but reused by someone else.

I’ve changed my electric to 100% renewable and actually saved money by doing so. I use smart thermostats and lights which actually lower consumption and make my life easier.

I don’t think I do anything that is hard or that everyone can’t do.

I fly a massive amount for work, so ended up with a 627% rating, oops. I try to do my bit, but sadly nowadays it’s always a bit dubious at best (as mechanical recycling being seriously limited, so councils tend to just dump it instead) 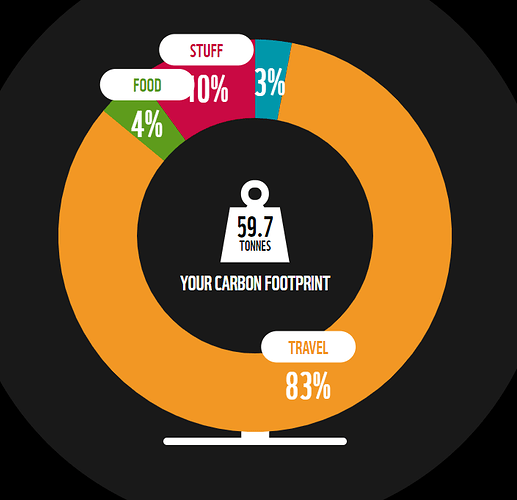 oh … wow! I realise that some people just have to travel …and not everyone gets rides on carbon-neutral sailing vessels to cross the Atlantic (though it does sound like fun if you have the time)

What do you think about the business of Carbon Offsetting in this sort of case? Do you believe in this? I see EasyJet has just bet quite big on this idea from a branding perspective

See, my inner cynic rises up on that. There have been so many scam in the offsetting business, that even the certified ones (and even that, a lot of the certifying authorities are seriously suspect, making it look more like futures, without ever having the actual production occurring) that, short of being shown serious proof that these are actually doing something, I’d rather do something on my side, even if it doesn’t reach that kind of scale. I really do believe that, if something drastic isn’t done right NOW we will be goners. But if these initiatives are just an offshoot of the original culprits, it’s hard to feel like what you’re doing is more than buying indulgences…

The problem with airline carbon offsetting is why should some passengers pay more for it, it should be something airlines do themselves. Some do, but most don’t. Air Passenger Duty was originally talked about, being able to help offset the environmental impact of flying, but it does nothing, so I think carbon offsetting from airlines is the same personally.

My worry is that if it was only paid by airlines, then it would simply be added to the price of tickets and used to create more profits. It would have to be a precise and ring-fenced charge that actually went towards carbon-offsetting projects.

If you look at Duty on alcohol for example, this is sold to consumers as a health charge, but in fact is used as a revenue source and there is no link between it and health activities or messaging investments.

I like the idea that somehow we, as consumers, are aware of this cost and feel the social duty to pay it so that we make informed decisions about flying versus using alternatives. Simply raising prices is a blunter instrument (though in fact we could do both).

Have you heard of Gold Standard carbon offsetting ratings?

I think the simple solution was, just add 10p onto each flight, that goes into a fund monitored by the government and the board being made up of representatives of environmental charities and members of the public and that money is used for environmental purposes. Imagine how many millions that will raise, and would people really care about 10p a flight. It’s a very simple solution to an important problem.

I’ve worked for a few companies that have tried to become carbon neutral, most fail because they don’t try hard enough. Sky is probably the biggest, and it has been carbon neutral for over 10 years. I know from working with them in the past, that suppliers that also offered carbon neutral programs or something like that, would be given Sky contracts, it worked. I think something like over half its suppliers are part of a program.

So if a big company like Sky can do it, there are options.

I came across this article while browsing twitter recently and I found it very interesting - maybe you will too - so also remembered this conversation in a new context, so thought it was worth reviving.

(note: I think that they give BP a bit too much credit for the marketing idea as I believe the term existed before, but maybe they found a way to work it to their advantage) 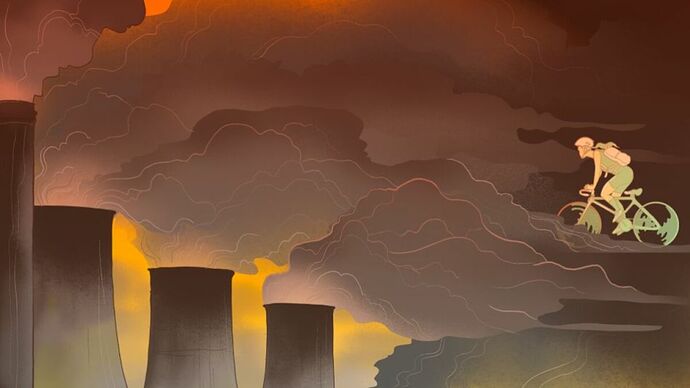 The devious fossil fuel propaganda we all use

“This is one of the most successful, deceptive PR campaigns maybe ever.”

This chimes a lot with me personally and professionally.

I completely agree that we individuals need to do our bit … but if we do it alone, we can’t have as big of an impact as we would if we did it together.

All our combined individual ‘green’ efforts are dwarfed by the carbon impact of industry and the wider economy. Unless part of our individual effort is to make them change, we’ll never achieve the ambitious (in the sense of hard to achieve) Net Zero in 2050 targets.

And to give it a bit of a Financial Wellness spin too … we can budget, save and invest as individuals, but if we don’t pressure the financial system to change, too many people around us will miss out and remain trapped in credit debt and lacking any financial resilience. This will also affect us, via our communities and countries.

So I guess the message is, do your bit, but don’t stress! It is not on your shoulders alone … we can work together to make change happen.