Well, I just saw my first advert for Dozens. It looked great plastered on the side of a double decker in Clarkston, Glasgow. The yellow… I mean mango

really stood out !
Just wondering what other advertising avenues have been utilised? Just curious as it’s the first one I’ve seen .

Any photos? I’ve heard that there are some of these around the Docklands, but I haven’t seen any myself…

I was driving … sorry

Hi guys, we’ve been pretty busy in the studio the past few weeks but now have some lovely big yellow ads out and about! Currently in London but we’ve got plans in store for National campaigns. I’ll share some pics here… let me know what you think 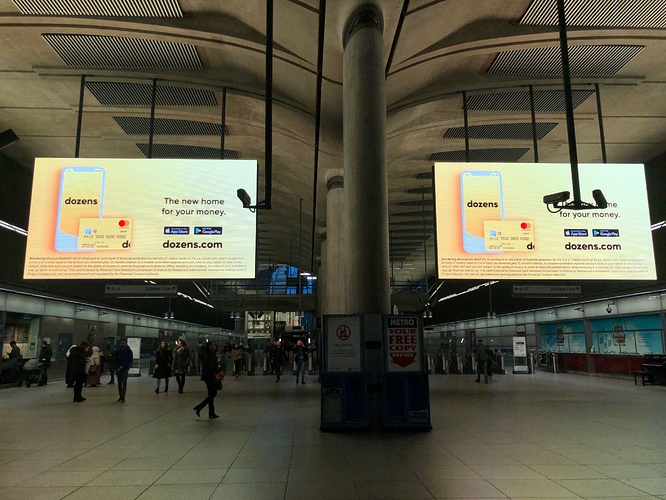 First ads up were these 2 beauties at Canary Wharf, I can’t seem to upload videos to this but these were animated. I’ll post some screens: 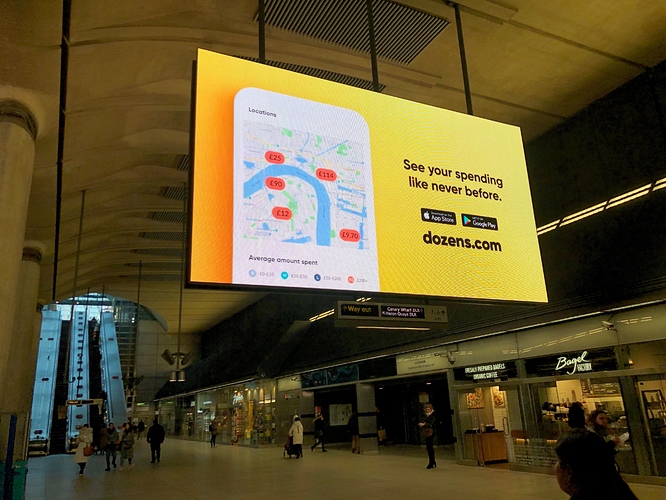 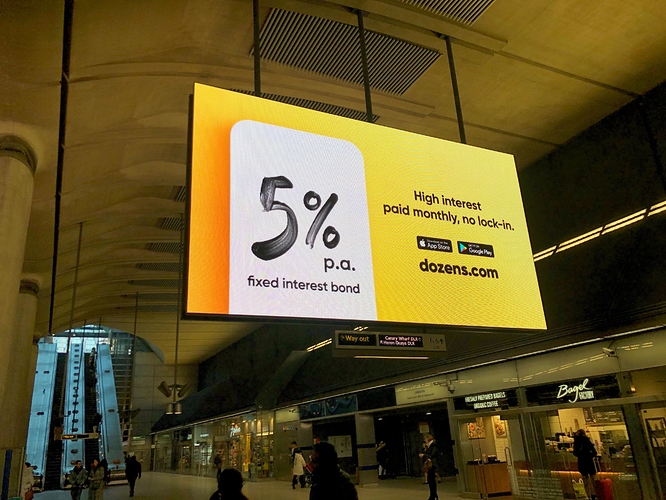 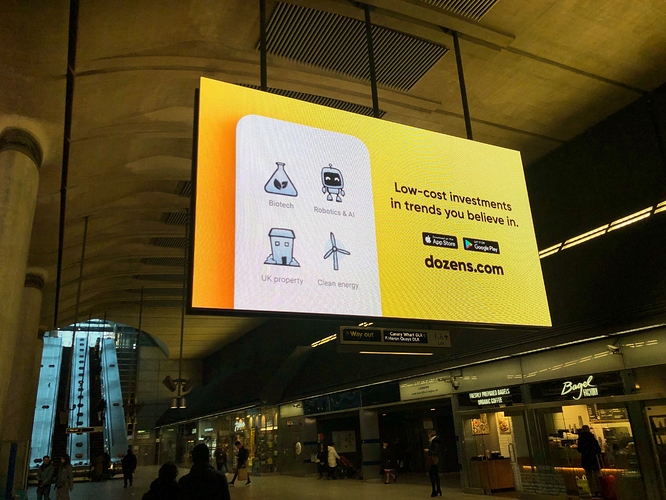 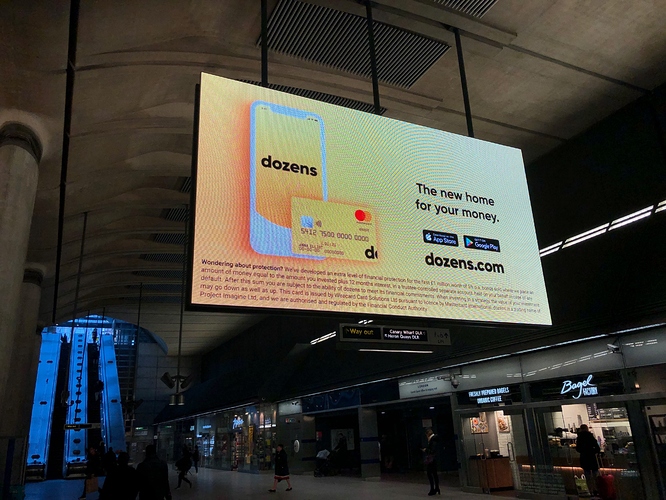 Fantastic to see these all together

And here’s one of our massive 48 sheet ads on the Underground! We’ve got these at around 12 stations 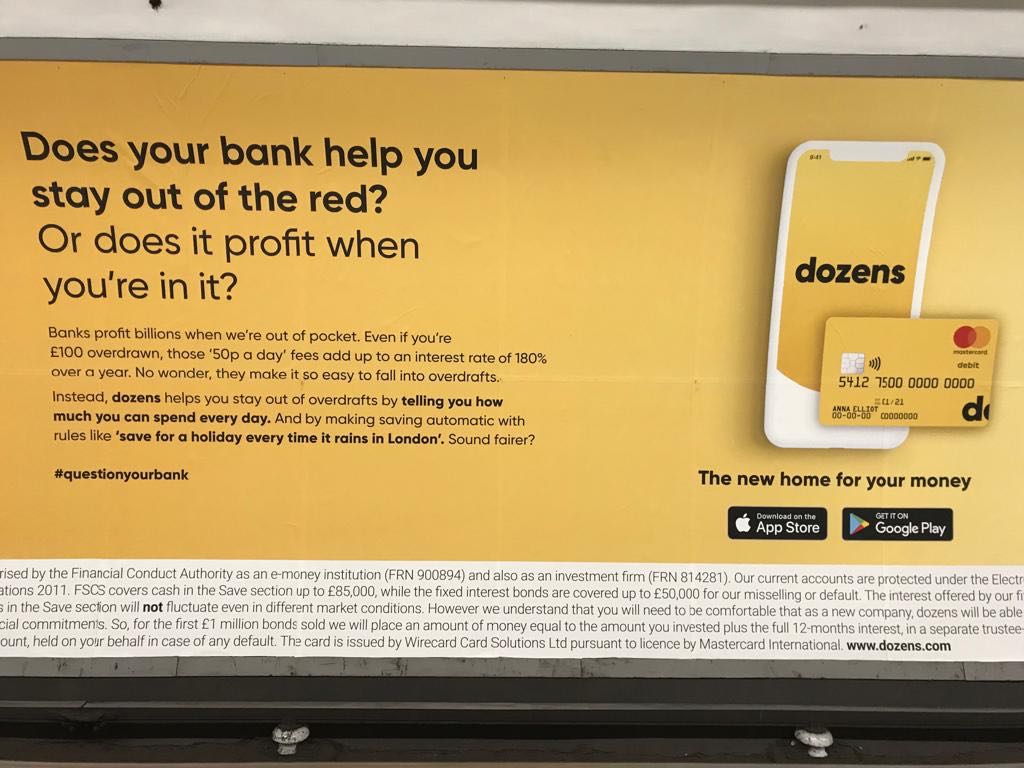 Was travelling through London so thought I should look out for them. Attached is some v blurry pictures of all that I found (there were a lot more than I expected!).

They’re looking really good in person, and I saw some people reading the larger ones on the platform which was cool 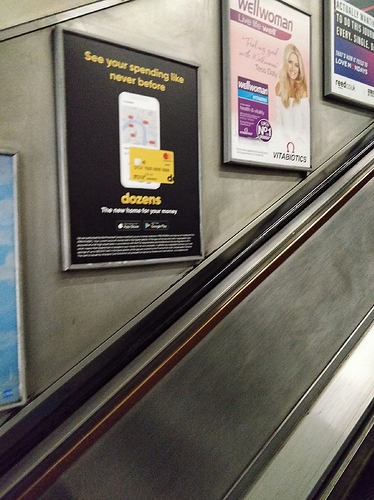 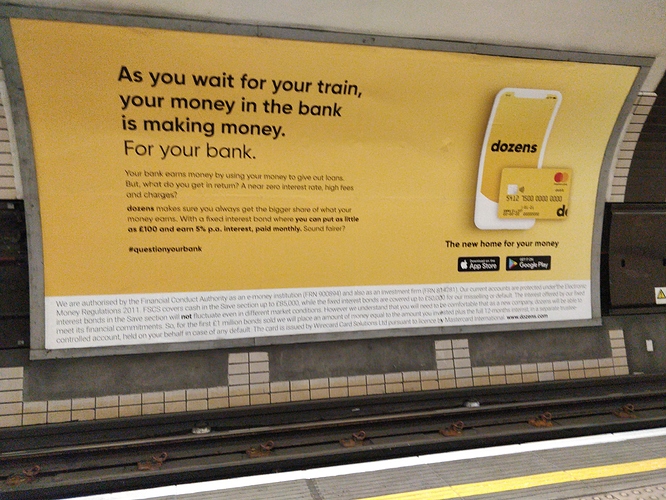 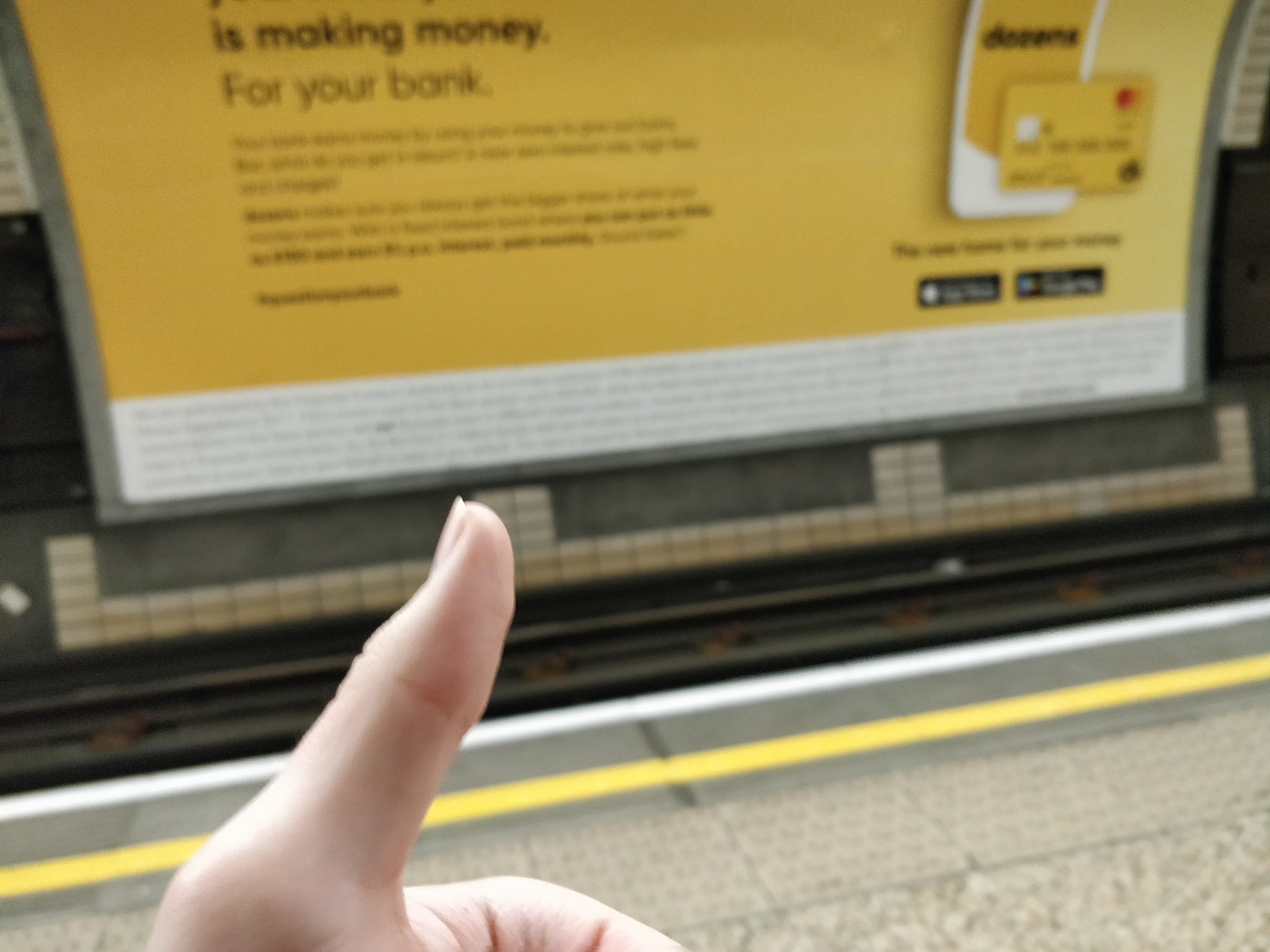 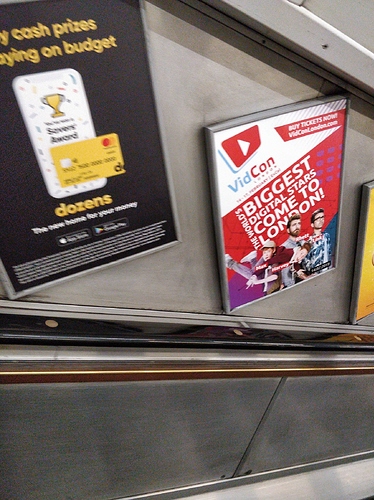 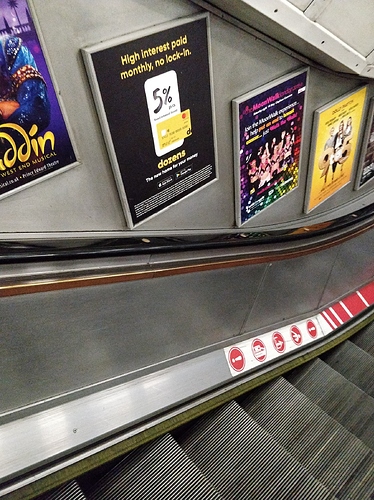 Have to say the advertising campaign hooked me. Was waiting for the tube at covent garden and thought this seemed like the ideal second account for me. Carried out the very quick application process (about 5 mins) on Tuesday and found there were 3421 applicants in front of me which was encouraging. The campaign clearly worked well. 5 days later there are 3399 applications still in front of me. That’s means approx 4.4 applications are being processed per day and I should expect a response in 772.5 days… Seems like a bit of a long time to me, and I may well be forced to spend 45 minutes in Metrobank opening an account which whilst a pain is slightly shorter than 2 years. The annoying thing is that I have merrily given all my personal details over…

That calculation rather assumes that we will hand out codes at the same rate constantly.

We are releasing codes slowly, and in batches. The first batch was extremely small in order to test the code generation, distribution and input. It is also a way to test the card production.

The next batch will be (a bit) larger since this has gone well. If those test users are happy and do not come across any further issues, further, larger, batches will be sent out on a regular basis. It will not take two years to get to you, don’t worry!

Hope that answers your question for now.

Hi Robert, thank you for the reply, I appreciate it’s the weekend so it wasn’t expected.

Have to be honest and say I know nothing about dozens other than the billboard and what’s on the website, but it seems an odd strategy to spend money on a campaign then using those who respond as guinea pigs to see if everything works… I work as a GPO and wouldn’t try to launch anything without knowing it was robust and more importantly, guaranteed the client experience was as painless as possible - I have found over the years that you mess up the onboarding and you’re destined to detract use immediately.

I don’t want to be sounding negative, I don’t mean to be. It’s just an opinion, and I sincerely hope you succeed as we need competition and disruption in the market to shake it up and question our current providers.

Anyway, looking forward to hearing from the bank soon, hopefully I’ve been accepted and not just got myself blacklisted!!

hopefully I’ve been accepted and not just got myself blacklisted!!

Ha! Not at all, we appreciate all the feedback

It is a good point, but the world cannot always be run as if we were all The Post Office - that is one reason that no-one has yet done what we are offering. Should only organisations with thousands of staff, huge research budgets and established brands be able to create new products?

Even the post office had to start somewhere … were the first postcards with penny black stamps “guinea pigs”?

We HAVE been testing and making sure the app and systems work, and while we do that we are not opening your account or putting any of your time, or money, at risk.

However, we are very close to launch, and so we are inviting users to sign up and wait a very short while before being able to use the app.

We can’t REALLY test the application process or the app itself until we have real customers using it, and that is what we are doing, but in a measured way. This is not about being a guinea pig, but about using something new and and exciting, and plenty of people are keen to do that.

To use an analogy, we can build a bridge, and test it under different conditions by driving our own cars across, but when you “open it” for the first time, you want to make sure it is not to huge commuter and commercial traffic during stormy weather. We’re doing the equivalent of opening on a quiet, sunny Sunday so that the first cars across can do so in controlled conditions.

Thank you for comparing me to the post office though …

I read that as having worked for the the GPO, sorry about that!

That’s the trouble with TLAs

no problems, I’m with you on that one! Have a super weekend Robert!

Cool ads, I love the idea of people scrambling for their phones to snap the ones on stairs

I still don’t see the point on having so much advertising when you can’t onboard more quickly. Wouldn’t a soft launch have been better (using the original waiting list), and once you had capacity to expand quicker, then advertise more heavily? You could start frustrating customers who have been on the waiting list for a long time and keep seeing ads for a product they can’t use.

…and found there were 3421 applicants in front of me which was encouraging. The campaign clearly worked well. 5 days later there are 3399 applications still in front of me.

My count (in front and behind) has not changed for a little while. Are we to refresh the app in some way? I just open it occasionally (touch ID) and see where things are. 519 ahead - 3068 behind.

I still don’t see the point on having so much advertising when you can’t onboard more quickly.

To be fair to Dozens, it does sound a bit like they wanted to open up the app to the first users a week or two ago, but have a few technical glitches to overcome.

Yeah, it DOES happen, loads of things out of a dev’s control that can go wrong on launches. I’d rather have a polished product than a nightmare of one launched on the planned date, but so rushed it squeaks at the seams