Where’s Pharrell when you need him?

I know some other challenger banks offer fee free pos transactions abroad, but love the simplicity and fairness of dozens’ fees (or non fees

). And i reckon a lorry load of other customers will too.

Very kind of you to say so.

Without giving away any state secrets, can you let us know where you used it?

Sure. In Poland, in an ATM and PoS contactless

So there are no fees for ATM withdrawals abroad currently?

Any idea how long that will be there for?

Of to US in September

From a investor point of view (

Fingers crossed people don’t abuse but as we scale up it’s only a matter of time, surely?

So there are no fees for ATM withdrawals abroad currently?

Any idea how long that will be there for?

No, there are not, and no plans for there to be

It is something we will have to monitor. However, from a business point of view, we are not specifically targeting an audience of travellers (unlike some others in this space for whom this is a focus), but wanting to attract a UK-wide audience of consumers looking for savings and returns, so foreign exchange will not necessarily represent a large percentage of activity with dozens (just an extra benefit when you do), and therefore be sustainable.

Of course, things can change, but that is the vision

It is something we will have to monitor. However, from a business point of view, we are not specifically targeting an audience of travellers (unlike some others in this space for whom this is a focus), but wanting to attract a UK-wide audience of consumers looking for savings and returns, so foreign exchange will not necessarily represent a large percentage of activity with dozens (just an extra benefit when you do), and therefore be sustainable.

Of course, things can change, but that is the vision

The flip side of that is attracting customers. I won’t be tempted to use dozens as my main account unless the card use overseas were present. It’s not all downside, it’s very good at getting customers to try the account.

from a customer point of view it’s excellent

I would have thought that is the point in investing in Dozens. There are enough banks trying to profit by taking every penny from customers (especially those spending outside the norm or in financial difficulty) rather than building a business around supporting them. And it seems the life of such banks is not going to get easier.

And I think punitive fees are going to become a bigger issue. I still see some challenger banks with them, even though they are technically not allowed (at least in the UK).

Where I think Dozens can shine is the simplicity afforded to a wide range of customers in different situations and lifestyles. This is something I do not think high street or the main challenger banks have been good at at all.

For me, high street bank fees don’t hurt if you follow the norm (stay in UK, stay within limits, don’t make mistakes). With most challenger banks, you have to follow their way, which varies. They might have foreign or UK ATM charges, foreign transaction charges with a low free limit (Monzo may make lot of money from customers who didn’t keep track, but at what cost?), lost card charges, high contract termination charges (for pay monthly accounts), or just poor support and lots of time lost with any issue.

It might sound like I want some perfect bank, which I do, but don’t expect that. But I do think there was a space for simpler, worry-free banking which looks to me like Dozens fills, which is also why I invested a bit.

To introduce, I just want to simply say I am using Dozens as a normal card (with travel benefit).
I have spent ~£200 in UK, and withdrew £50 in Italy ATM, and another ~£250 in Italy card spending (over the Easter).

I have a question to ask on my foreign spending. 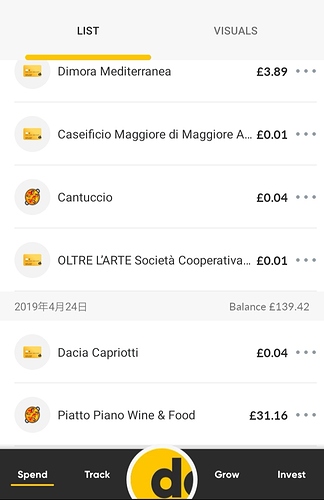 To relate to other fintech. Revolut doesn’t have this problem, the transaction at that instant is fixed. I realised Starling has this problem. The transaction summary will show initial decimals usually appear as fainted grey at the instant of transaction, after a day or two, the decimals will turn solid black, and the figure usually will go up by again few pennies.

So my question is, does anyone know what’s happening on the background?

(My guess is some kind of Mastercard floating exchange rate, versus the merchant’s charged exchange rate which usually happens few days later?)

Monzo usually gets around this by showing an estimate of the GBP amount at the time you make your purchase, then adjusting this value when the transaction settles to be the actual amount in GBP that you have paid.

I would like dozens to shift to something similar tbh. Hopefully we’ll see a better solution in the future.

Thanks for that, I thought the same.
But again, I hope that people don’t see Dozens as a travelcard.

So even though this is a problem, it should not be the main problem that worries people. I’d rather have a better Dozens that is focused on making spending budgeting saving in UK better for now.

Thanks for taking the card for a spin in Italy @tonyayp - other than the transaction issue, was everything straightforward?

You (and @Albatross) are correct. The difference here is that the ACTUAL exchange happens when the merchant settles the transactions, and that may be a few hours or even a couple of days (over a weekend) after the transaction itself, so exchange rates can vary.

We do agree that this adds noise to the spend list so we are working on a neater solution for the interface. Something should be coming to your app soon.

You are right that we are not intending to be primarily a “travelcard” but we would love Dozens to be your all-purpose card in due course, so should work in other countries as easily as the UK if this is how you lead your life.

Spending is simple! One card solves it all, no problem with top up, contactless or chip and pin.
One small issue is card-preauthorisation in petrol station. Even though I have enough balance, it seems like dozens card just wont get it preauthorised, I had to use my revolut card instead.

Thanks for the answer.
Am happy with the spending, will move on to save and invest section of the app now.

One small issue is card-preauthorisation in petrol station

Because of the way they work, “pay at pump” petrol pumps are not able to check balances , and therefore are blocked from being used with the card. You can, however, pay at the cashier, so it is not about the petrol station or your card, only the limited connectivity of these systems.

thanks for the reply